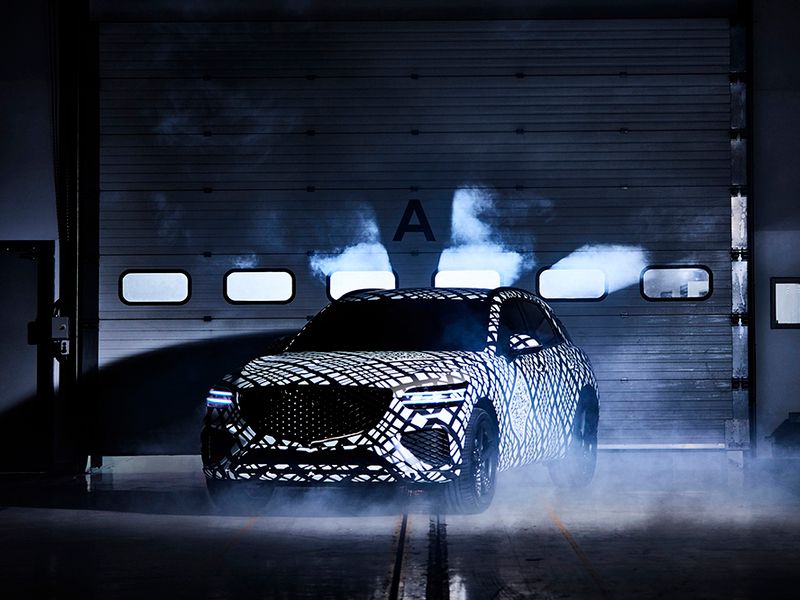 Genesis is teasing the upcoming GV70 crossover prior to road testing in Korea, where observers can interact with the vehicle.

The camouflaged compact luxury crossover will be tested on public roads for one month starting this week, the automaker said Tuesday.

“Observers who are fortunate to catch it in the wild can scan a QR code on the vehicle’s wrap to learn more about the camouflage pattern and G-Matrix,” Genesis said.

Even under the wrap, the GV70’s family styling is apparent.

The teaser photo shows the brand’s large “crest” grille at the front with quad headlights bisected horizontally. One of Genesis’ design themes is dual parallel lines in the front, side and rear lamps.

The GV70 has a strong resemblance to the luxury marque’s first crossover, the GV80, which is set to go on sale in the fourth quarter after a delay related to the coronavirus shutdowns this year.

The GV70 is expected to go on sale next year as a 2022 model. It’s based on the refreshed G70 sedan, which has a turbocharged four-cylinder engine as standard and a turbo V-6 engine as an option.

The compact crossover could get a hybrid or plug-in hybrid version in the future based on coming Hyundai and Kia crossovers with new hybrid systems. An all-electric Genesis crossover also is expected to launch next year in the U.S. on a dedicated EV platform shared with Hyundai and Kia.

The GV70 and GV80 will mark a new era for Genesis dealers who have been waiting for crossovers to fill out the brand’s lineup. Genesis currently sells three sedans, all of which are in declining segments.

When to Sell a Stock