FREELAND, Mich. — President Donald Trump made wildly inaccurate claims at a rally outside Saginaw on Thursday night, suggesting he has revitalized auto manufacturing in the state when it actually lost jobs even before coronavirus hit in March.

But only one new major assembly facility, a Jeep plant on Detroit’s east side, has been announced during Trump’s term, while General Motors underwent a divisive 40-day strike last year and announced the idling of four U.S. plants, including two in Michigan. One of those, Detroit-Hamtramck, has since been revived and is being retooled to build electric cars and SUVs. Warren transmission was revived most recently to make face masks, though its future is uncertain.


Start the day smarter. Get all the news you need in your inbox each morning.

Navya, a French shuttle maker, announced it could employ 50 or so people at a plant in Saline, said Kristin Dziczek, vice president of industry, labor and economics with the Center for Automotive Research in Ann Arbor; Waymo, which makes self-driving cars, said last year it would employ 100 people at an assembly plant in Detroit and could someday expand that number to 400.

That’s hardly a signal of a vast resurgence. Trump has also apparently made similar exaggerated claims in other campaign stops, with the Washington Post saying he has been “bragging about imaginary auto plants.”

Trump also said that after speaking with Japanese Prime Minister Shinzo Abe, officials announced “five new car companies are coming to Michigan,” but there has been no such announcement that the Free Press is aware of. In March 2019, a day after Trump spoke to Abe by phone, Toyota announced a $749 million investment in plants in Alabama, Kentucky, Missouri, Tennessee and West Virginia, but none in Michigan.

He also said no new assembly plants had been built in the state in more than 40 years but at least two new GM plants have opened since 1999.

As of February, there were about 2,400 fewer auto and auto parts jobs in Michigan than when Trump took office in January 2017. There are even fewer now as the economy recovers from the coronavirus shutdown, though it’s up from where it was when auto plants were shut down almost entirely in April.

At another point in the wide-ranging speech, Trump repeated, “You better vote for me, I got you so many damn car plants.”

Trump also took jabs at Democratic nominee Joe Biden, chastising him for supporting trade deals — including a vote he took as a U.S. senator from Delaware in the 1990s for the North American Free Trade Agreement, though Biden had been calling for a renegotiation for years. He also called on Gov. Gretchen Whitmer to reopen Michigan, which has largely already happened, telling the crowd of about 5,000, “You’d be doing a lot better if you had a governor who knew what the hell she was doing.”

Polls have shown Michigan voters are largely supportive of Whitmer’s handling of the coronavirus pandemic in the state. During the speech, Trump accused Biden of wanting to “flood the state with refugees,” take away people’s guns and “destroy your suburbs,” though all of those claims were wild exaggerations or outright falsehoods. He also repeated a claim — which no one has been able to verify — that he had once been given a “Man of the Year” award in Michigan.

Trump spoke to more than 5,000 supporters at the airport a few miles north of Saginaw, standing at a podium with Air Force One as a backdrop. While campaign volunteers passed out masks and hand sanitizer, most attendees did not wear facial coverings and ignored social distancing guidelines.

That was in stark contrast to Biden’s visit Wednesday, when the former vice president spoke outside a UAW hall. That speech was closed to the public, with media and a handful of attendees asked to remain in chairs spaced throughout a parking lot.

While Michigan generally limits outdoor gatherings to no more 100 people, there are exceptions for political gatherings.

It is a key area to Trump’s reelection hopes. In 2016 in the four mid-Michigan counties — Bay, Genesee, Midland and Shiawassee — Trump did markedly better than Republican nominee Mitt Romney did four years before and saw huge support in the neighboring Thumb and in the counties to the north hugging the western shore of Lake Huron. In some of those areas in 2018, however, support began to move back toward the Democrats.

Four years ago, Trump won Michigan by two-tenths of 1% of the vote and polls having him trailing Biden this year, though they have been narrowing.

Nearly an hour into the speech, he hadn’t touched on two recent controversies — a report in the Atlantic that he called war heroes “suckers” and “losers” and the revelations this week from Bob Woodward’s newest book that the president intentionally downplayed the severity of the coronavirus in public in February when telling the journalist he knew how serious and dangerous it was.

He eventually glossed over the statements he made to the veteran journalist, calling Woodward a “whack job.” He also likened his decision to knowingly withholding information about the severity of coronavirus to the British mantra popularized in World War II, “keep calm and carry on.”


The president faced mass criticism for withholding the severity of the pandemic; Biden called the move “beyond despicable” and “a dereliction of duty.” Whitmer said Thursday the comments show Trump is “the biggest threat to the American people.”

The president and staff say he acted to avoid public panic, arguing if the statements had been truly damning that Woodward would have pushed to publish them sooner. Prior to the trip to Michigan, Trump again downplayed the report, saying he had to appear calm at the time.

© Ryan Garza, Detroit Free Press
Flags fly on the back of trucks while waiting to hear President Donald Trump speak during a campaign stop at Avflight Saginaw in Freeland on Thursday, September 10, 2020.


The president, meanwhile, drew huge applause at the rally when he said he’s working to get Big Ten football to play this year. Although university leaders previously refuted the idea that they’re close to resuming a season, earlier in the day Trump said he thinks teams in Michigan will play this year.

“We want a governor … who is going to let Michigan play football this year,” he said at the rally. Earlier in the day he said from the White House it was “crucial for colleges and universities to stay open. We hope that they do indeed stay open. We want to see Big Ten football, we hope it’s coming back.”

In the days leading up to the rally, Whitmer called the president’s decision to hold an event open to so many people “very distressing.” As of Thursday there had been more than 2,700 confirmed coronavirus cases and 133 deaths in Saginaw County. But attendees were expected from all over the state and the Midwest.

More than 6,900 Michigan residents have died from COVID-19, the disease caused by the coronavirus, according to state health officials. More than 120,000 residents have contracted the virus since the state started tracking cases earlier this year.

Whitmer and Biden blasted the president ahead of his rally, noting he denied the governor’s request to provide federal funds to pay National Guard members in the state who are assisting with COVID-19 relief efforts.

The governor said Trump was “continuing to play political games while American lives and livelihoods are on the line.” Biden agreed, tweeting “Michiganders need a pandemic response — not a pep rally.”

© Ryan Garza, Detroit Free Press
People have their temperature checked while waiting to hear President Donald Trump speak during a campaign stop at Avflight Saginaw in Freeland on Thursday, September 10, 2020.


Trump called on the state to “open up the state” and “open up the schools.” Under a bipartisan agreement passed in August, Whitmer and lawmakers agreed to allow individual districts decide whether they wanted to offer face-to-face classes, virtual courses or a combination.

While most businesses are allowed to operate in at least a limited capacity, movie theaters and other similar establishments have remained closed since March.

Polls show James trails Peters but the race may be tightening. James, who lost his 2018 race against U.S. Sen. Debbie Stabenow, D-Michigan, spoke out against police brutality and said both parties have failed Black voters. But he spent most of his time speaking going after Peters, accusing him of inappropriately increasing his wealth in office and noting he relies on publicly funded health care.

“We are content with calling ourselves the silent majority. It’s wrong, no more. Why are we quiet?” James said, to thunderous applause.

Peters’ campaign put out a statement dismissing the attacks. “Michiganders know that Gary Peters is an effective, bipartisan leader who works across the aisle to deliver results for them. And tonight, they heard nothing but more attacks, empty rhetoric and zero solutions as John James doubled down on his 2,000% support for Trump that includes gutting protections for 1.7 million Michiganders with preexisting conditions.”

James has said that he supports protecting coverage for preexisting conditions but has not detailed how he would do that nor has he come out against the Trump administration’s fight in the  U.S. Supreme Court to have the Affordable Care Act, otherwise known as Obamacare, ruled unconstitutional, which would end those protections.

Tina Oldford and Jennifer Hay, both of Howell, said this was their first Trump rally. In fact, they said this is the first time they’re voting for president. Oldford, 59, and Hay, 53, said they believe the president is sincere and is looking out for their best interests.

“Years ago, it seemed like the Democrats were for the workers and Republicans were for the rich people. But now, I just think it’s all over the board.”

Election Day is Nov. 3, but Michigan voters may request an absentee ballot now.

Used car sales are booming, and that’s pushing up inflation 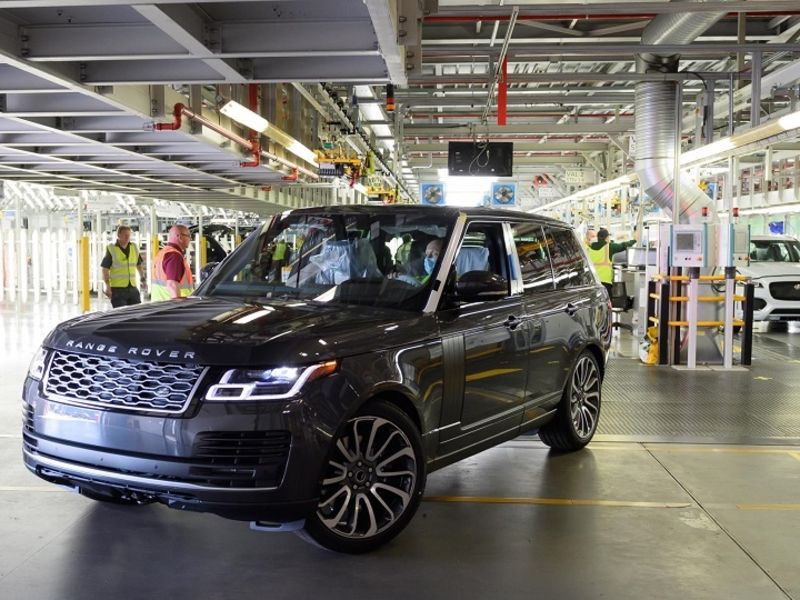