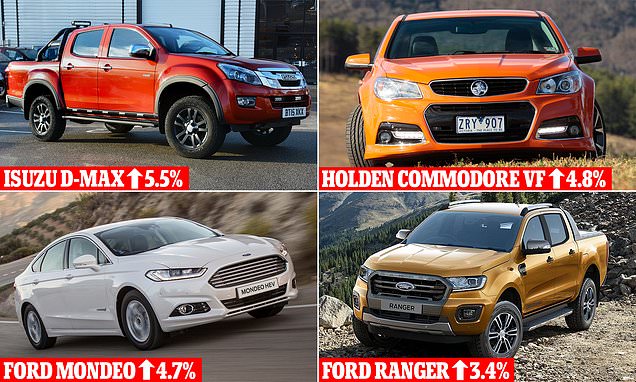 Passenger cars that weren’t even popular when new are highly sought-after now during volatile economic times.

In just one week, prices for used Holden Commodores have surged by 4.8 per cent, Datium Insights data has revealed.

That is a stark contrast to its fortunes as a new car last year, when showroom sales dived by 34.6 per cent – as buyers disapproved of an old Australian favourite coming from Germany.

The most sought-after used cars in Australia

Holden Commodore: up 4.8 per cent

Holden Colorado: up 1.5 per cent

Toyota Corolla: up 1.3 per cent

Subaru Forester: up 1 per cent

Even the Ford Mondeo, hardly ever a popular choice when new, is igniting secondhand buyer interest with its used prices rising by 4.7 per cent – despite the fact the model is no longer sold new in Australia.

The supply of new cars fell by 10.4 per cent in just one week as the COVID-19 crisis created an ‘incredibly volatile’ market.

Secondhand ex-government fleet cars are in vogue, particularly if it has a tray at the back.

This has seen demand soar for utes, even if buyers are flocking to models that are now outdated.

Isuzu D-MAX prices soared by 5.5 per cent, despite late-model secondhand examples being the old model which was replaced earlier this month.

Ford Ranger values climbed by 3.4 per cent, with the late-model ones on the market now set to be replaced in 2021 with an all-new version that is based on a Volkswagen Amarok instead of a Mazda BT-50.

Toyota HiLux prices increased by 2.9 per cent, despite the fact a face-lifted model was released in late August.

Before the pandemic, used vehicles traditionally depriciated when a new model was unveiled.

The SUV market was another surprise, with Toyota RAV4 values falling by 1.3 per cent in one week, despite the medium high-rider being Australia’s most popular new car in July and August.

Toyota Kluger values fell 2.2 per cent but Subaru Forester prices have increased by one per cent.

Overall used car prices rose by 2.1 per cent in the week to September 28.