Well, there is never a “bad time” to go public. Fisker, though, took a different route through a reverse merger with Apollo Global Management-affiliated Spartan Energy Acquisition Corp. (NYSE:SPAQ), bringing another EV player into the market. SPAQ stock spiked as a result of the announcement. And although it has cooled down somewhat, shares are still up almost 36% over the past six months.

The SPAQ/Fisker deal will yield more than $1 billion of gross proceeds that the newly minted enterprise will use to bankroll the development of the all-electric Fisker Ocean through the start of production in 2022. If all goes according to plan, the company will start generating some serious dough from 2023 onward.

Overall, considering the red-hot state of the EV sector, SPAQ is an exciting spec play that is worth your time.

SPAQ Stock Has a Lot Going for It

Although there was a lot of excitement surrounding the merger, there is also some justified trepidation. Henrik Fisker’s first company Fisker Automotive filed for bankruptcy in 2012. Henrik Fisker is a Danish-American automotive designer and entrepreneur who has designed a lot of automobiles. But the question on everyone’s mind is whether he can parlay his success as a designer into the automobile sector.

A couple of things to note here. Fisker has assembled an impressive team that will lead the company. It includes former executives from BMW (OTCMKTS:BMWYY) and Volkswagen (OTCMKTS:VWAGY), apart from Fisker himself. So, there is undoubtedly some experience there that the company can tap into.

The EV market is also vastly different from the landscape in 2012. There was still a lot of confusion surrounding EV vehicles and their viability back then. But the fog has cleared. Electric cars are the future of the industry. Every major car manufacturer globally, from Ford (NYSE:F) to Toyota (NYSE:TM), is now firmly behind the concept and wants a piece of the pie.

The markets have made up their mind and are going green. More importantly, so have administrations.

Recently, California Gov. Gavin Newsom issued an executive order effectively banning the sale of new gasoline-powered passenger cars and trucks by 2035. In a media briefing explaining the move, he said that the measure is expected to help climate change initiatives and presents an “economic opportunity to transform our economy.” The move was met with mixed emotions.

On the one hand, many environmental groups praised the governor for taking such a bold step. However, many also felt that the plan was unfeasible, considering the mammoth infrastructure requirements needed to be put in place.

Regardless, climate change is slowly taking center stage in our national debate. That bodes well for companies with their products tailored as a solution rather than a problem in the issue.

And it’s just not the States. China has passed legislation that wants new energy vehicle sales to account for 25% of total auto sales by 2025. Anywhere you look, and the theme is largely the same. Countries all over the world want to increase the share of EVs in new vehicle sales. If we look at the first half of 2020, only Norway has a sizeable EV sector, so there’s plenty of space to grow. This will be a great long-term tailwind for SPAQ stock. 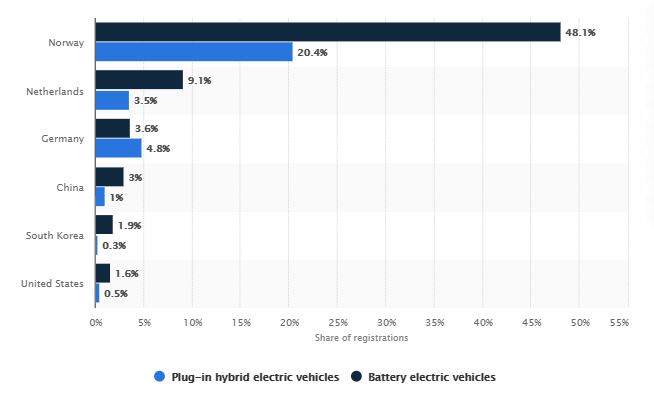 Although we have talked up the tailwinds for the company, let’s touch upon some of the risks associated with the stock.

Perhaps the biggest issue that Fisker faces is its stalled partnership with Volkswagen. As part of the arrangement, Fisker will have access to the German automaker’s MEB electric-car platform. However, the agreement was signed in 2017, and we are still not sure when the agreement will be finalized. VW’s supply chain is key to Fisker’s future success, with the batteries, the chassis and software of the Ocean hinging on the success of this partnership.

As per a recent investor presentation filed with the Securities and Exchange Commission (SEC), Fisker could not sign a “cornerstone agreement” with Volkswagen, something expected to be done by the end of July. Hopefully, the company can get this done and dusted soon so that its supply chain issues get addressed.

Also, Fisker is entering a highly competitive market. We’ve extensively covered some of the leading players of the EV sector. The bottom line is that the fight for market share is just beginning. Plus, no company has done exceedingly well in the space, apart from Tesla.

Fisker plans to be the world’s first digital car company. The company will not employ sales clerks; instead, this will be done through a mobile app. That will help drive down costs, but as InvestorPlace‘s Josh Enomoto said, design sets the company.

While I get the fact that Tesla hires excellent designers, this is a technology firm that’s building an EV. On the other hand, Fisker is an automotive company first, incorporating technology to complement the design element.

Ultimately, there is space for everyone at the table, so long as you provide a quality product. Ford used to dominate the auto sector, and now Jim Farley has the unenviable task to dig it out of a hole. A decade ago, Tesla was an afterthought, and now it happens to be one of the most valuable companies in the world.

That’s why SPAQ stock is a bet that is worth taking.

On the date of publication, Faizan Farooque did not have (either directly or indirectly) any positions in the securities mentioned in this article.

Faizan Farooque is a contributing author for InvestorPlace.com and numerous other financial sites. He has several years of experience analyzing the stock market and was a former data journalist at S&P Global Market Intelligence. His passion is to help the average investor make more informed decisions regarding their portfolio.

The post SPAQ Is an Interesting Play in a Red-Hot EV Market appeared first on InvestorPlace.

Kenney taking Alberta in one direction as world moves in another