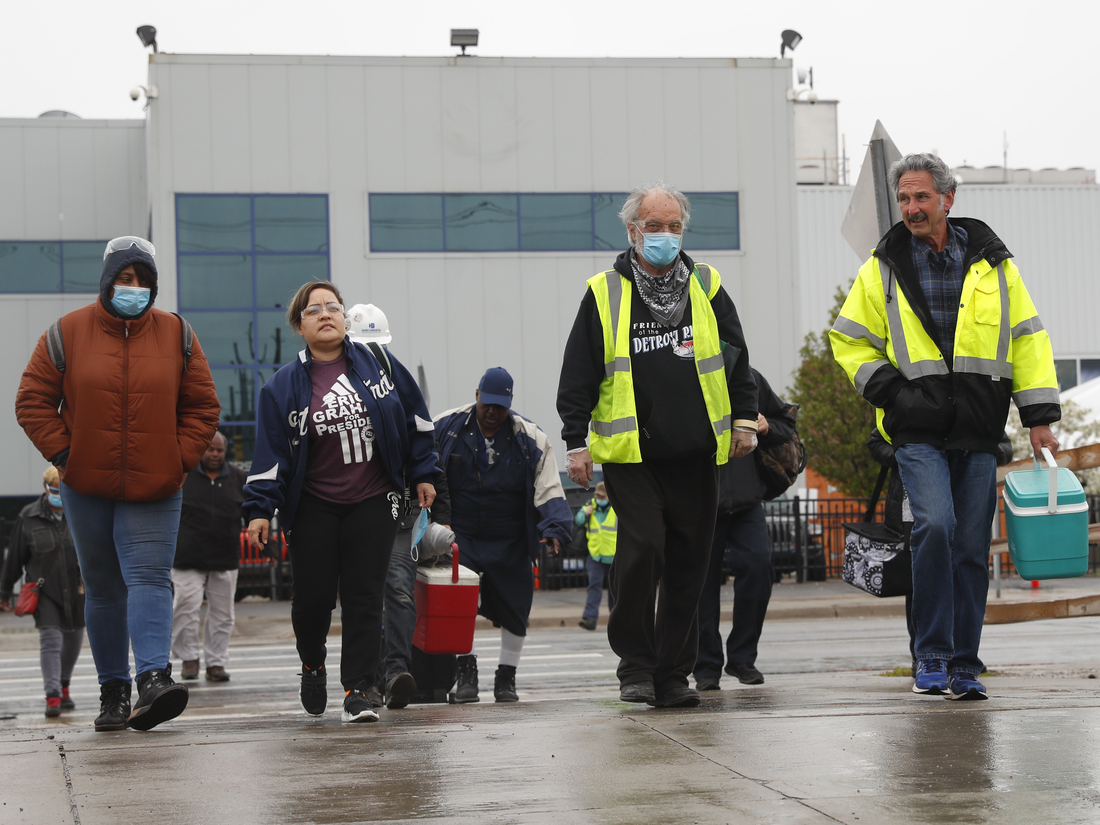 United Auto Workers members leave the Fiat Chrysler Automobiles Warren Truck Plant after a shift on May 18, 2020, in Warren, Mich. Car sales are picking up again, but auto makers face a problem: getting enough workers. 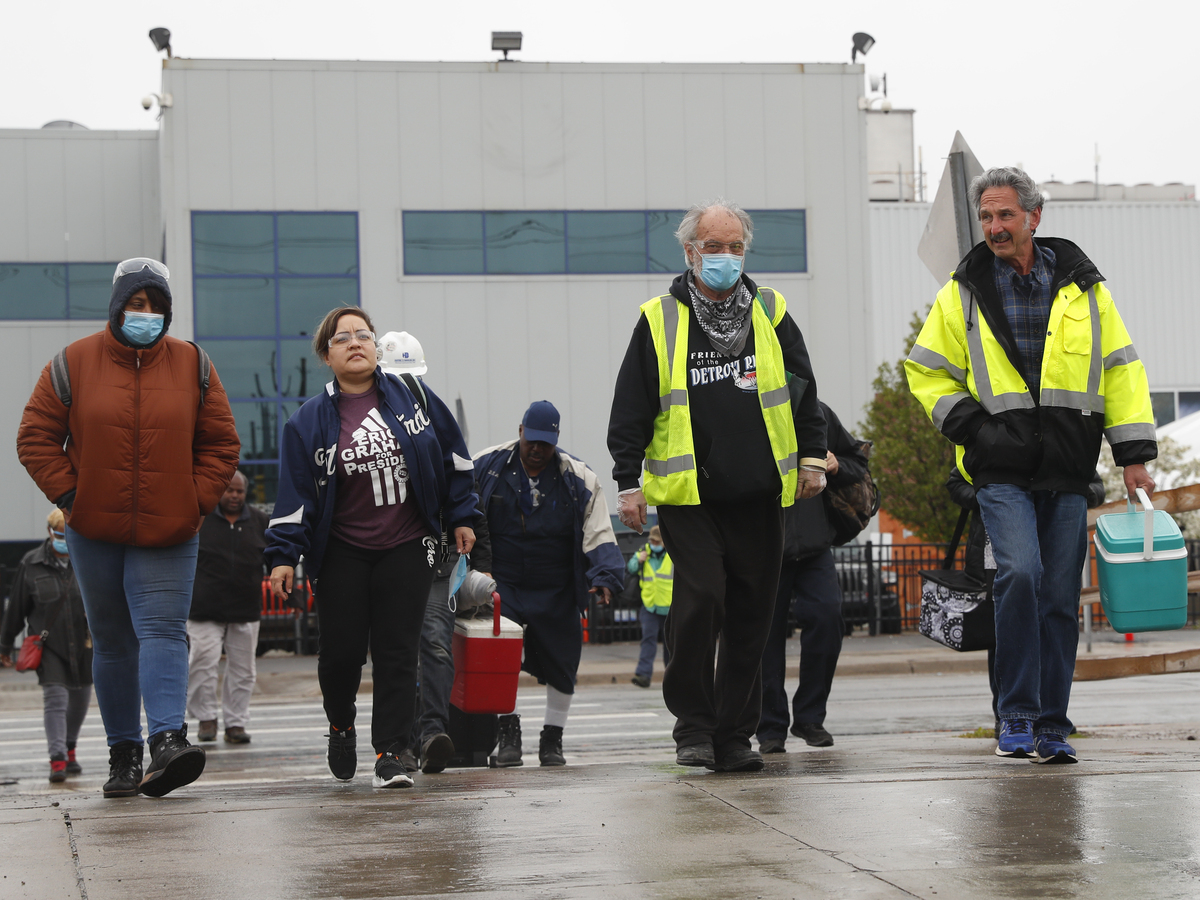 United Auto Workers members leave the Fiat Chrysler Automobiles Warren Truck Plant after a shift on May 18, 2020, in Warren, Mich. Car sales are picking up again, but auto makers face a problem: getting enough workers.

Orbital Insight CEO Jimmy Crawford has, quite literally, a birds-eye view of the U.S. auto industry

“We can just look at the number of cars in the parking lot,” he said.

This spring, when the industry entered its unprecedented shutdown because of the coronavirus pandemic, “there was just nobody there,” Crawford said. “Just really skeleton crews.”

Production of cars stopped completely. But sales continued, draining the inventory at auto dealerships. Now plants are working overtime to catch up with that pent-up demand.

In fact, Wards Intelligence, an automotive research and analytics firm, found that vehicle production in North America has returned nearly to pre-virus levels — a remarkable recovery.

But staffing levels within most plants, according to Orbital Insight’s data, have not fully recovered.

One challenge is absenteeism — a word that might bring to mind people playing hooky, but which actually covers all the reasons someone might not show up for work.

And during a pandemic, there are lots of reasons workers might not show up, from not having child care to waiting for a COVID-19 test result, or even being quarantined after a positive result.

“Based on the number of COVID quarantines that we’ve had, we’ve hired a little over 200 additional team members to support that quarantine absenteeism,” said Emily Lauder, the vice president of administration at Toyota Mississippi, a non-unionized plant in Blue Springs, Miss., where about 2,000 workers assemble Corolla sedans.

By late August the plant had confirmed nearly 100 positive cases. Most of those employees had been exposed to the virus outside the plant, Lauder said, a sign that safety measures inside the plant were working.

But in order to keep the virus from spreading inside the plant, all those positive cases meant a lot of quarantines. That’s created gaps on the production line that haven’t been easy to fill, despite the high rate of national unemployment.

Lauder, for example, says Toyota has “struggled somewhat” finding temporary workers, or what the company refers to as “variable workforce.”

Like some other automakers, Toyota Mississippi is sending a few white-collar salaried workers to help with production.

Some of those employees had worked in a plant before making the switch to an office job. But in other cases, staff with no manufacturing experience have been trained in what Lauder calls “freshman processes” — production tasks that are a little bit easier.

Not all automakers put salaried workers on the line like this — at least, not usually. But these aren’t usual times. One General Motors plant, in Wentzville, Mo., has recently deployed white-collar workers to the line over the strenuous objections of the auto workers’ union. Meanwhile, as NPR member station WOSU first reported, office workers at a Honda plant in Ohio were startled to be deployed to the line.

But Lauder says using white-collar workers isn’t so unusual at Toyota. Twenty years ago she was in accounting, and was trained to help build transmissions in a pinch.

Still, this is obviously not plan A for how to build cars.

“Nobody wants to do this,” said Kristin Dziczek, Vice President of Industry, Labor and Economics at the Center for Automotive Research. “This is not the optimal way to run production, to be running with salaried workers.

Dziczek said staffing shortages are partly because auto plant jobs can be difficult in the best of times, and particularly intimidating during a contagious pandemic.

“It’s a daunting prospect to go into a plant,” she said. “There’s 2,000 people on an assembly plant shift and, you know, if you’ve been locked down and self isolating …. the thought of going to work with 1,999 other people, it’s a big challenge.”

And while auto manufacturing used to pay very attractive wages, that’s no longer automatically true for new hires. In some areas, they can make more money at other kinds of plants.

Lauder says in northeastern Mississippi, Toyota is competing with furniture factories for manufacturing workers. She also says the plant will be announcing a raise this fall.