DETROIT — At Matick Chevrolet in Redford Township, the loaner car coordinator’s toughest job isn’t keeping track of the 244 loaner cars in its fleet, but rather explaining the no-smoking policy to some customers.

The policy forbids smoking of any kind in the loaner cars. That means tobacco, vaping and pot, the latter of which is becoming more common and is a big problem to eradicate.

Save better, spend better:  Money tips and advice delivered right to your inbox. Sign up here

Ever since Michigan legalized the recreational use of marijuana in December 2018, many metro Detroit car dealers say the cars they buy, service and loan out are increasingly smelling of that unmistakable repugnant skunky stench that anyone who has ever been to a rock concert knows instantly.

Masks required: Uber will soon require selfies for some riders with an expansion of a mask verification feature

Pot smell is as difficult, if not impossible, to get out as cigarette smoke. It can ding a trade-in’s value and destroy a dealer’s loaner car. Many dealers now require customers to sign a contract agreeing to not smoke or vape – anything – in a loaner car, or face a hefty $150 to $250 cleaning fee. 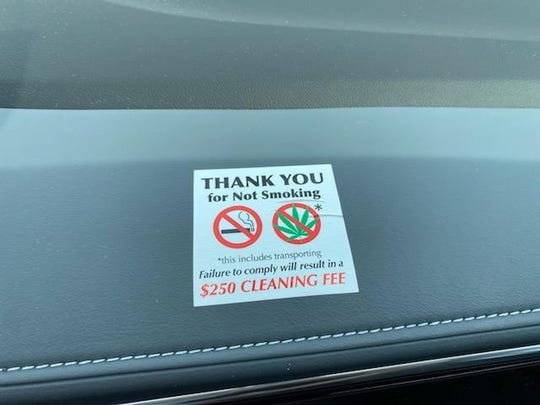 ‘We call it bombing’

At Sellers Buick GMC in Farmington Hills, the proliferating smell of weed in cars is “definitely a problem,” said Sam Slaughter, owner of the Buick GMC store and Sellers Subaru in Macomb. “Sometimes people bring their car in for service and my guys don’t even want to get in it because it smells so bad.”

At least twice a month, the used cars that the dealership purchases will reek of either cigarette or marijuana smoke, said Jeff Weissman, reconditioning center manager at Sellers Buick GMC.

“For me, cigarette smoke is much worse than marijuana smoke,” Weissman said. “I recognize it immediately and it’s disgusting more than anything. But with smoking, there could be ashes in the vehicle and the window glass is yellowed.”

Sellers Buick GMC has 65 loaner vehicles. The Subaru store has 40. Beyond signing a contract agreeing to not smoke in the car, users are greeted with a prominent sticker on the dashboard of each car reminding people of the rules – it includes a green weed with a red line through it. Slaughter said most customers are agreeable.

“They appreciate it because they don’t want to rent a car that smells like smoke,” Slaughter said. “The smokers might grumble about it, but nobody gets irate. We only had a couple of cars where you couldn’t deny how terrible it smelled.”

And if you think the smell left behind from vaping isn’t as bad as cigarettes and pot, think again, Slaughter said. The process to eradicate smoke odor of any kind from loaner cars or used cars is costly to a dealer and can take days, meaning that vehicle can’t be loaned out or sold during that time.

“We call it bombing,” Slaughter said. “There’s a smoke bomb you put in the car and close the door and let it sit for three hours to three days, and still not get it out. It just depends on how severe the smell is. If it’s somebody who’s driven 60,000 miles and smoked a pack of cigarettes a day in there, there’s nothing you can do about it.” 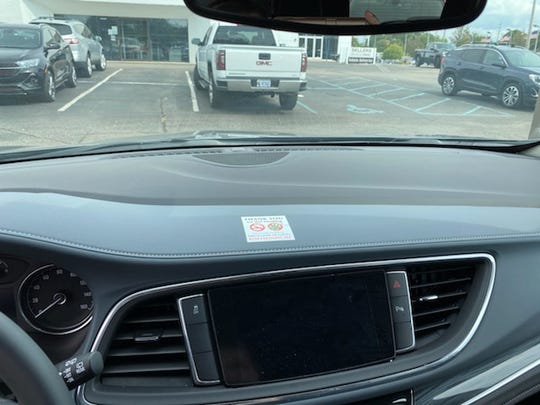 At Village Ford in Dearborn, about 10 to 15 of the used cars it buys each month smell of marijuana smoke, said Jim Seavitt, who owns the dealership.

“It’s a real problem; we’ve got to put a bomb in it and it takes a couple hours to get rid of the smell,” Seavitt said. “But it is similar to getting that cigarette smell out.”

Seavitt has customers sign a no-smoking agreement before taking out a loaner car. He charges a $200 cleaning fee if it’s returned smelling of smoke of any kind. Two months ago, the dealership had to charge someone the full fee when they returned the car stinking of weed, he said.

But it’s in the Quick Lane service area where Seavitt said they’ve seen the biggest increase in pot smell in cars. He said about 25% to 30% of the cars that come through it have the fresh-from-a-concert smell. The service technicians “hate it because it gets on their clothes.”

“It’s the way of life these days with marijuana being legalized. About 100 to 150 cars a month have smoke or marijuana smell in Quick Lane,” Seavitt said. “It’s greatly increased in the last year. All it is, is an inconvenience. We still sell the car, we still service the car, it’s an inconvenience, and frankly it’s tough on employees who have to work on those cars.” 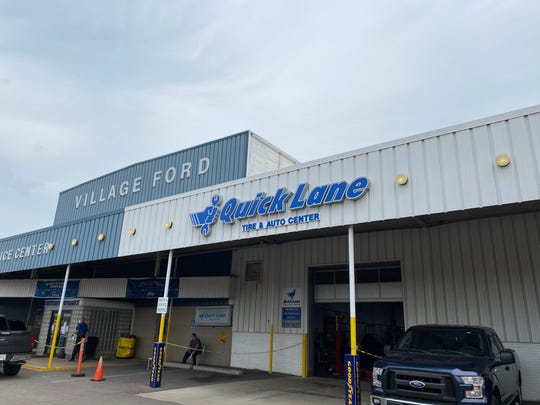 Village Ford Quick Lane has seen an increase in cars coming in for service that smell of marijuana ever since Michigan legalize recreational use in December 2018. (Photo: Jason Markwart)

The apple and coffee grinds

At Matick Chevrolet, there hasn’t been a huge uptick in weed odor in used cars or loaners, Zimmermann said. He charges a $150 cleaning fee if the loaner car is returned smelly or dirty.

“It probably happens once every few months and it could be cigarette smoke or weed … or dog hair,” Zimmermann said. “If you get a Lab jumping around a third row of a vehicle, that’s a lot of work to clean. We want to make them look new again so it takes a lot of work.”

Matick uses an “oxidation machine” inside the car for several hours to overnight to lift any odors and clean the car, Zimmermann said. But sometimes technology isn’t enough. 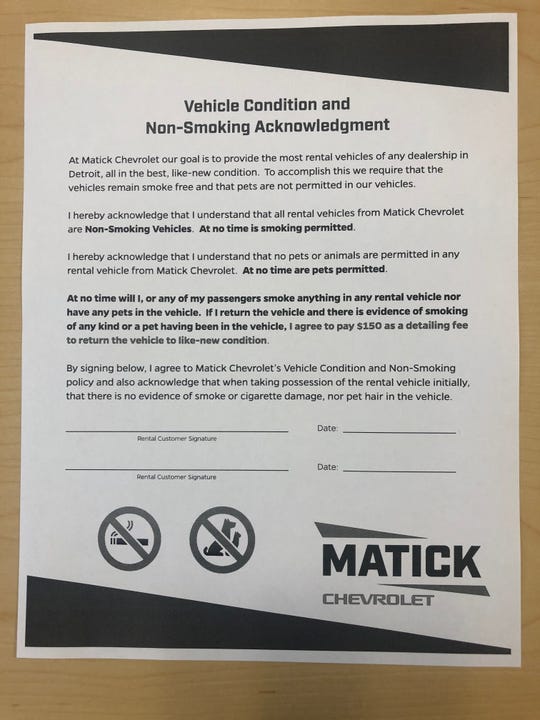 The loaner agreement for Matick Chevrolet forbids smoking of any kind in their loaner cars or a fine is charged. (Photo: Rebecca Goble)

“There are some other tricks, like you split an apple open and set it on a can of fresh coffee grounds and the acidity of the apple draws the smell through it and the coffee grounds absorb it and it eliminates the smell,” Zimmermann said. “That was a trick, when I was a kid 28 years ago and I was a porter, you’d do that and it worked pretty well.”

So sometimes, he said, they put the oxidizer machine and the apple with the coffee grinds in the car together and leave it overnight and it works.

But a “severe” smoke smell in a car can ding a trade-in value by 5% to 10% of the price the car might normally command, Zimmermann said. Of about 150 used cars Matick buys each month, 10% have a smoke smell that prompts the team to say, “we’re going to have a hard time getting this out.” 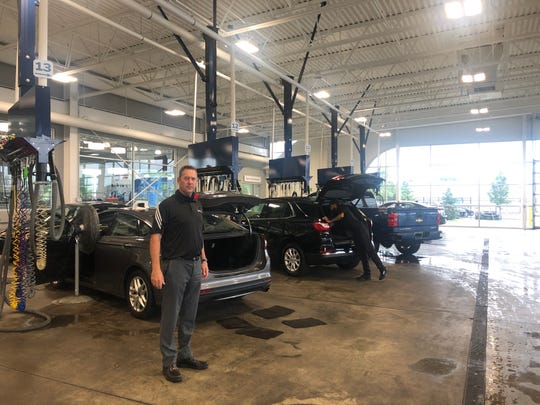 Paul Zimmermann, director of sales for Matick Automotive stands in Matick Chevrolet’s detailing center where technicians have to use machines to get smoke smell out of used cars. (Photo: Rebecca Goble)

Since weed is now fully legal or decriminalized and allowed for medicinal purposes in all but eight states, demand for The Odor Doctors’ services is “through the roof,” said Frank Simmons, CEO of The Odor Doctors, a Houston-based car detailing company that specializes in getting nasty smells out of cars.

At least half of the calls they get from dealers across the country are for help to remove the stench of cigarette, marijuana or vaping smoke.

“If you smoke marijuana, cigarettes, vaping … it’s all in that same general idea. A vapor type product does omit an inorganic odor,” Simmons said. “An inorganic smell would be perfume and sometimes people will spray that to mask another odor and it’s really hard to get it out.”

He said he has been getting a lot of calls from “high-line dealers who have loaner cars because they used to mask it and now they can’t,” Simmons said.

There are other companies that do odor removal such as Master Odor Removal. The Odor Doctors charges dealers a flat fee of $150 per car and consumers $199 to get an odor out. It can usually succeed in under two hours and Simmons guarantees it for 30 days, he said. About 1% of the time they have to redo it, he said.

They do not use the chlorine bombs or oxidation machines, Simmons said. His company first uses a proprietary extraction foam to expose the smoke tar. Then it applies a process called “dry saturated steam.” The steam heats up to 340 degrees and is pressurized to penetrate surfaces and remove odor, Simmons said. 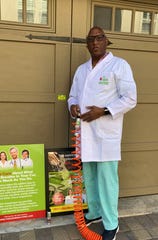 Some dealers give The Odor Doctors 30 to 40 cars a month. In the past 15 years, the company has treated over 70,000 cars across the country.

The Odor Doctors also has mobile services in California, Florida, Atlanta, Las Vegas and Illinois. Simmons wants to hire technicians in other states, including Michigan, because of the increased demand to eradicate weed smells from cars.

For one thing, with increasing online vehicle sales, some customers will buy a car sight unseen. When it arrives in their driveway and they open the door, pee-yew!

“This is a very common problem we have now as cars are sold online all over the United States. They get the car and it’s got a bad odor in it,” Simmons said. “That’s when they call us.”

But there is still one stink that tops them all.

“Mice get into a vent and get trapped and die inside there and we have to get the odor out and it’s really bad, it’s far worse than pot,” Simmons said. “The problem with an animal odor is it’s more difficult to find the animal in the car. Once you get to them, you can take the odor out.”