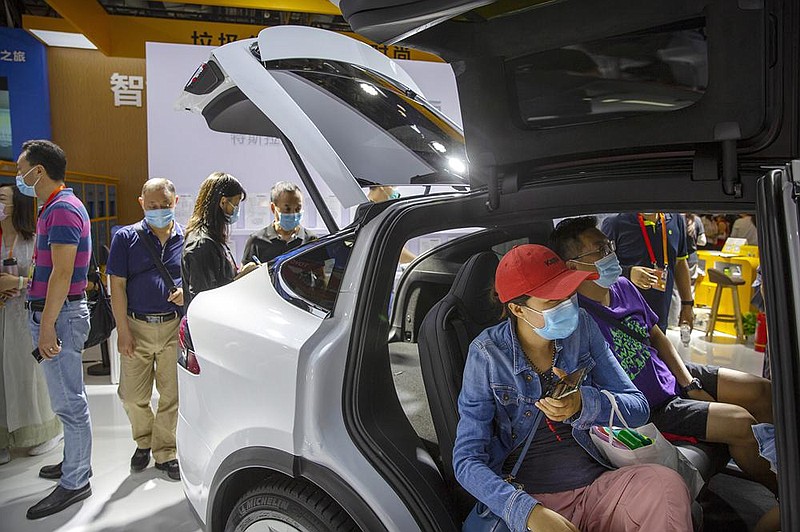 Visitors look at a Tesla Model X SUV displayed Saturday at the China International Fair for Trade in Services in Beijing. (AP/Mark Schiefelbein)

“This has always been our dream from the very beginning,” Musk said at his company’s “Battery Day” event in Fremont, Calif., showcasing its technology. “In about three years from now, we are confident we can make a compelling $25,000 electric vehicle that is also fully autonomous.”

Musk, 49, is teasing prospects for a less-expensive mystery model without ever having really delivered on the $35,000 price point long promised for the Model 3. Three years after Tesla started taking orders for the car in early 2016, the CEO announced plans to close most of Tesla’s stores as a cost-saving measure allowing him to offer the car at that cost. He backtracked 10 days later, and the lease-expensive Model 3 available now is $37,990.

Musk also said Tesla will make battery cells at a plant under construction in Berlin, where it also plans to assemble vehicles.

Tesla has focused on squeezing as much energy as possible out of its batteries, with industry-leading range figures that have bested its competitors by dozens of miles per charge. Now it has its sights set on a different goal: building batteries that cannot only beat rivals’ range — or how far their cars can travel on a single charge — but far outlast the life span of a vehicle.

It’s the latest innovation push by the Silicon Valley car builder that has aimed to rewrite the rules on electric vehicles. But electric vehicles constitute a small slice of the overall car market, and to expand, Tesla will need to reign supreme over not only the manufacturing of vehicles but also their lifeblood: batteries.

“Today, [electric vehicles] account for about 3% of cars sold globally,” Gene Munster, an investor and managing partner of Loup Ventures, wrote in an analyst note ahead of the event. “Tesla has an opportunity to parlay its current 80% [electric vehicle] market share in the U.S., along with about 20% in Europe and Asia, into a massive business in the years to come.”

Musk has said any new development in batteries will involve a serious ramp-up of production to power vehicles the company has announced, such as its Semi, Cybertruck and Roadster. Tesla would need to advance its battery technology to make some of those offerings possible, given that it has announced a range of more than 500 miles for one variant of its Cybertruck pickup.

Tesla says its current highest-range offering — the Model S — can travel as far as 402 miles on a single charge. Competitors such as start-up Lucid Motors have announced energy-dense electric vehicles with ranges topping 500 miles.

Batteries are one of the most complex ingredients in electric vehicles, thanks in large part to the resource-intensive process of manufacturing them. A battery with a longer life span presents one route to reducing the environmental footprint of electric vehicles, making them a more viable proposition at the scale needed to start really phasing out internal-combustion cars.

Still, the mining of rare metals, including those needed to build electric vehicles, can expose local communities to significant environmental impacts, including toxic elements that can lead to respiratory issues and birth defects.

Tuesday’s event was set to take place after an annual shareholder meeting at Tesla’s manufacturing facility in Fremont. It was an unusual setting tailor-made for the covid era.

Rows of Tesla cars filled with shareholders lined up in a parking lot near the presentation stage. The drivers gave a rousing honk of approval when Musk took the stage and proceeded to beep their horns whenever Musk made a proclamation they liked.

Information for this article was contributed by Dana Hull and Akshat Rathi of Bloomberg News;and by Faiz Siddiqui of The Washington Post.