On September 22, a massive fire ripped through American Axle and Manufacturing’s plant in Malvern, Ohio, causing extensive damage and temporarily shutting down production. All employees were evacuated safely. There were no injuries or deaths.

One hundred and twenty firefighters from 18 fire departments from the surrounding counties of Carroll, Stark and Columbiana worked for 13 hours to put out the blaze. Some nearby businesses and the local school system were forced to close for the day as black smoke blanketed the area. The local water supply was directed fully toward the firefighters’ efforts, resulting in little to no water pressure for surrounding homes and businesses. 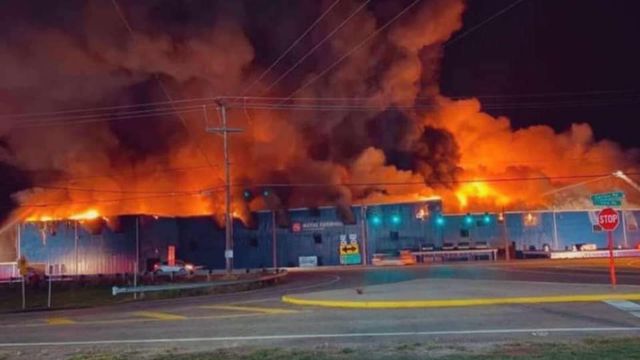 The cause of the fire is still under investigation, but the fire appears to have been sparked by a hydraulic press and fed by hydraulic fluid, and then spread quickly throughout the facility. While American Axle and Manufacturing reports that it has yet to assess the full damages, it is estimated that the fire caused millions of dollars in damages to both products and the building itself. The plant is currently closed until further notice.

In rural Carroll County, where 53 percent of the workforce commutes outside of the county for work, the Malvern plant is the county’s largest private employer. While some employees are currently engaged in the clean-up for the plant, most are in limbo, unemployed and given no information on when or if the plant will reopen.

American Axle and Manufacturing (AAM) was formed in 1994 when General Motors spun off much of its parts plants to private investors. Based in Detroit, Michigan, AAM has plants in 90 countries across the world, employing an estimated 20,000 people and producing a variety of parts for passenger cars, trucks and commercial vehicles.

The Malvern plant has 276 employees and produces forged transmission shafts, hypoid drive pinions, propeller shafts, transmission gears and wheel spindles for both automotive and nonautomotive use. In total, the Malvern plant generated $100 million in profits for American Axle and Manufacturing last year. The Malvern plant supplies a large amount of parts to General Motors. In 2019, roughly 37 percent of the plants’ business was with General Motors. While it is not yet clear which GM vehicles or plants will be most affected, the significant damage to a major parts plant will impact GM production.

As with the auto parts industry as a whole, which was converted by a series of bankruptcies and divestitures beginning the 1980s into an ultra-low wage sector, conditions at AAM are exceptionally poor, far below even the disastrous conditions at the major automakers’ assembly plants. Wages for auto parts workers are also on the decline. Between 2003 and 2013, auto parts workers saw a 14 percent decline in real wages, triple the speed of losses compared to manufacturing as a whole.

The Malvern plant is a unionized facility, organized under the United Auto Workers (UAW). Unsafe conditions at auto parts plants across the country are primarily the responsibility of the UAW union who betrayed a series of strikes in the parts industry in the 1980’s and 1990’s in order to lower costs and boost profits of auto corporations.

A 2008 strike by AAM workers was sold out by the United Auto Workers, which forced through a new contract slashing wages from $28 to as low as $10 per hour. This betrayal paved the way for the closure of AAM’s largest US plant in Hamtramck. An empty concrete lot is all the remains of the plant in the Detroit enclave.

The coronavirus pandemic has also spread widely throughout North American parts plants, as workers are being forced to work weekends and overtime to make up for widespread absences. Although the true extent of the virus unknown due to an information blackout by the parts companies, major outbreaks have occurred already at the Faurecia Gladstone and Lear Hammond plants in Indiana, DENSO’s plant in Battle Creek, Michigan and maquiladora plants in northern Mexico.

Ten fatal workplace injuries occurred in the auto parts industry in 2018, the last year in which statistics are available from the Bureau of Labor Statistics. That year also saw a fire which sparked several explosions at the Eaton Rapids, Michigan Meridian Magnesium plant, injuring two workers. At the time, workers in Facebook groups confirmed that plants from Kansas City to Tuscaloosa, Alabama were experiencing temporary layoffs due to lack of parts previously produced by Meridian.

The Meridian Magnesium workers were only paid for two work days following the incident. Those who were not hired as part of the clean up crew were transferred to other units far from their homes and families or simply laid-off.

After such accidents, the parts companies force workers to shoulder the financial burden of workplace accidents in the form of layoffs, even though the accidents themselves are a result of cost cutting and managerial negligence of basic plant safety. “[Parts workers] just had their hands up and said, ‘What do we do? We don’t have any place to go to work,’” Malvern Mayor Robert DeLong told the Columbus Dispatch. “They’re dumbfounded. It’s devastating.”

The Malvern plant—like the Michigan Meridian Magnesium plant—has a history of safety violations. In 2011, the plant was cited for four safety violations by the U.S. Department of Labor. One citation was a repeat violation for failing to set-up lockouts for hydraulic presses that are not in use. Without such an arrangement, the hydraulic presses could operate unintentionally, causing significant injury—such as amputation—or death to workers.

The other violations were for lacking specific safety procedures in controlling hazardous energy managing workers exposed to hazardous energy. Hazardous energy, according to OSHA is any energy source including electrical, mechanical, hydraulic, pneumatic, chemical or thermal that can be hazardous to workers.

Workers at American Axle and Manufacturing’s Malvern plant should construct rank-and-file safety committees, following the example of workers at FCA Jefferson North Assembly, Faurecia Gladstone, Ford Kansas City to defend themselves against serious safety events as well as the threat of the COVID-19 pandemic. The lives of autoworkers and auto parts workers are more important than corporate profits.