Brussels is poised to rebuff an attempt by the UK to secure smooth market access for exports of electric cars, rejecting proposals from Britain aimed at maintaining supply chains after the end of the Brexit transition period.

EU diplomats said the European Commission was wary of plans presented by UK negotiators last week that would give car manufacturers the right to source a large amount of components from other countries while still exporting vehicles tariff-free to the EU.

Four out of five cars made in the UK are exported, with more than half currently going to the EU. British car plants owned by Nissan, Toyota and PSA are all reliant on European sales for more than half of their business.

Several of the UK’s key car plants, such as those of Toyota and Nissan, already import significant amounts of electrical technology from Japan for use in their British-made cars, and would be hit if the finished cars ended up incurring tariffs when exported to the EU.

The UK plan, seen by the Financial Times, would greatly ease rules requiring goods to have a minimum amount of locally produced content, relaxing these requirements compared with other trade deals. Trade agreements tend to stipulate that about 50 per cent of a product needs to be locally sourced to qualify for preferential market access.

The arrangements put forward by the UK would apply to “electrified vehicles”, an umbrella term for electric cars and hybrids.

The UK proposed that Japanese components should count as “British” on the grounds that both the EU and UK have trade deals with Tokyo. The EU would benefit from the same right for its exports to the UK. Doing so would make it easier for cars to meet the thresholds for local content needed to qualify for the zero tariffs offered by a potential EU-UK trade agreement.

More generally the UK is also seeking to minimise the amount of local content needed to secure the tariff-free access for electric cars. Its proposal suggests that, as a starting point, 70 per cent of components could be non-UK.

This threshold would gradually drop during the early years that the trade deal was in place: first to 60 per cent, and then 50 per cent by the seventh year after the agreement takes effect.

Under the UK plan, an exported car could benefit from either the arrangement for Japanese components, or these especially high thresholds for non-local content.

Many of the mass-market car manufacturers in Britain are already struggling to raise their level of UK content above the threshold needed to avoid export tariffs, but a dearth of homegrown suppliers for key parts is holding back the industry. 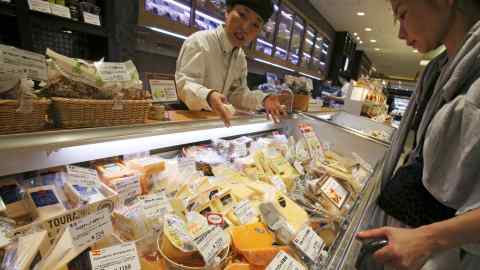 But EU officials said the plans had revived fears among some member states that Britain was seeking to remain an assembly hub exporting to the single market despite having left the bloc — a threat repeatedly articulated by Michel Barnier, EU chief Brexit negotiator.

Mr Barnier, who made clear his reservations about the UK plans in a meeting with EU car industry representatives on Monday, warned earlier this year that the EU must prioritise “long-term economic interests” over “short-term adaptation costs” for business.

The commission’s hard line, backed by countries including France, comes despite calls for flexibility from industry on both sides of the channel in light of Europe’s current lack of self-sufficiency in battery and electric vehicle component production.

A person familiar with the negotiations said the commission was potentially more flexible on batteries as opposed to finished vehicles.

The European Automobile Manufacturers’ Association has warned that any restriction of rules of origin for battery technology must be “calibrated against an increase in European battery manufacturing capacity”.