Nikkei Asia is tracking the spread of the new coronavirus that originated in the central Chinese city of Wuhan.

To see how the disease has spread, view our virus tracker charts:

5:05 p.m. The Philippines reports 1,990 new infections, the lowest number in three weeks, and 40 additional deaths. Total confirmed cases in the country have risen to 344,713, the highest number in Southeast Asia, while deaths total 6,372.

3:30 p.m. Automobile sales in China rose 12.8% in September from the same month a year earlier for the sixth straight monthly increase. Sales reached 2.57 million vehicles last month, according to China Association of Automobile Manufacturers’ data. Auto insiders refer to “Golden September, Silver October,” regarding those months as the high season for China sales as drivers venture out to make purchases after staying away during the stifling summer.

12:35 p.m. China’s imports grew at their fastest pace this year in September, while exports extended their strong gains as more trading partners lifted coronavirus restrictions, customs data show. Imports surged 13.2%, returning to growth from a slump of 2.1% in August. Exports rose 9.9% from a year earlier, up from a solid 9.5% increase in August.

11:00 a.m. Malaysia’s government has approved a 1 billion ringgit ($242 million) loan as a lifeline to budget carrier AirAsia Group as it struggles to contain the fallout from the coronavirus pandemic, Nikkei Asia has learned. Johnson & Johnson hopes to restart clinical trials after reviewing results from an independent agency and its own medical staff.

10:20 a.m. U.S. multinational Johnson & Johnson has paused clinical trials for its vaccine due to an unexplained illness in a participant. The ailment is being evaluated by an independent monitoring board as well as its own physicians, the company said in a statement.

10:10 a.m. China reports its first locally transmitted infections in nearly two months, as Qingdao launched a city-wide testing drive after discovering cases linked to a hospital treating imported cases. The National Health Commission said 13 infections were reported on Oct. 12, down from 21 a day earlier. Seven of the cases originated overseas, while all six local infections were from the province of Shandong, where Qingdao is located.

9:30 a.m. U.S. President Donald Trump returned to the campaign trail on Monday since being diagnosed with COVID-19, appearing at an outdoor rally without a mask. Trump talked about his recovery. “I went through [the disease] now. They say I’m immune. I feel so powerful,” he told supporters standing shoulder to shoulder, most without masks.

6:39 a.m. U.S. President Donald Trump tests negative for COVID-19 and is not infectious to others, his White House physician says. In a memo, Dr. Sean Conley said Trump had tested negative on consecutive days using an Abbott Laboratories antigen card. The doctor said the tests and other data “indicate a lack of detectable viral replication.”

6:00 a.m. Japan’s first clinical trial for a coronavirus vaccine is underway inside Osaka University Hospital. Some of the small-scale results, along with those from another university, are expected within the next month or so and will determine whether a larger trial can be held in November involving 500 people. 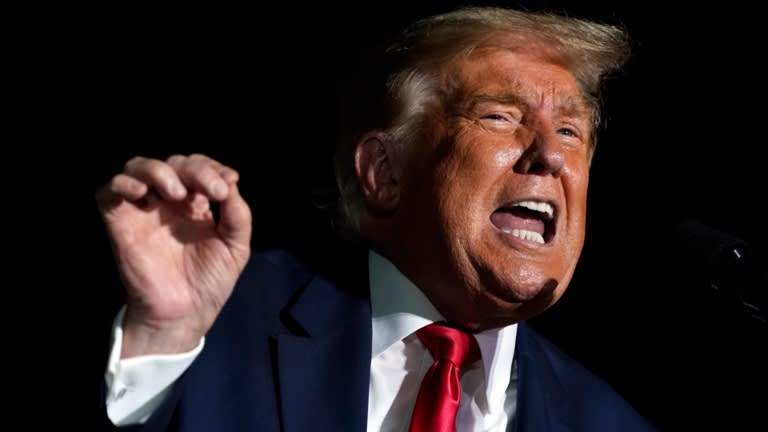 U.S. President Donald Trump speaks during a campaign rally in the state of Florida on Oct. 12.

12:20 a.m. British Prime Minister Boris Johnson imposes a tiered system of further restrictions on parts of England including closing some pubs as the COVID-19 outbreak accelerates.

Johnson’s three-tier system, announced in parliament, is an attempt to standardize a patchwork of often complicated and confusing restrictions imposed across England.

7:48 p.m. Malaysia imposes a two-week restriction on movement in the largest city, Kuala Lumpur, the seat of government, Putrajaya, and the state of Selangor, effective Oct. 14. The orders come in response to a spike in coronavirus cases in the country, with the total reaching nearly 16,000. 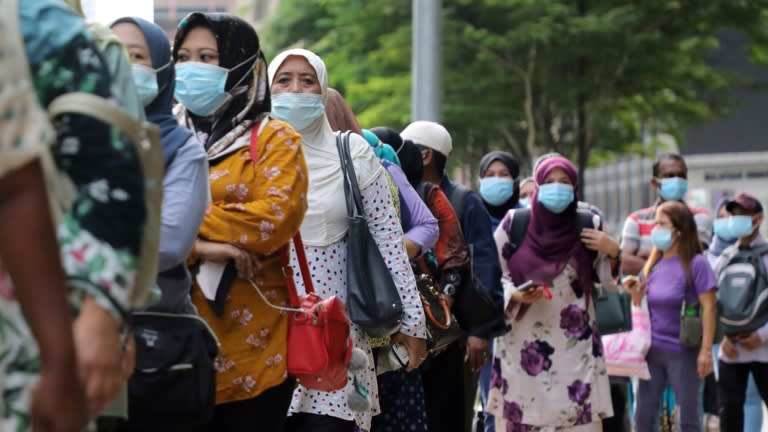 Passengers wait to board a bus in Kuala Lumpur on Oct. 2: Malaysia will impose restrictions on movement starting Oct. 14, as COVID-19 cases surge.

2:00 p.m. South Korean drugmaker Celltrion says it has received approval for Phase 3 clinical trials of an experimental COVID-19 treatment. This comes as the company plans to seek conditional approval for its CT-P59 antibody drug for emergency use by the end of this year. The trials will involve about 1,000 asymptomatic patients and those who have come into close contact with infected individuals.

12:20 p.m. New Zealand signs a deal to buy 1.5 million vaccine doses from Pfizer and BioNTech, with delivery scheduled for as early as the first quarter of 2021. Terms of the deal were not disclosed, but the government’s first vaccine purchase will cover 750,000 people. Officials said talks were underway with other drug companies for more vaccines to cover the country’s entire population of 5 million. 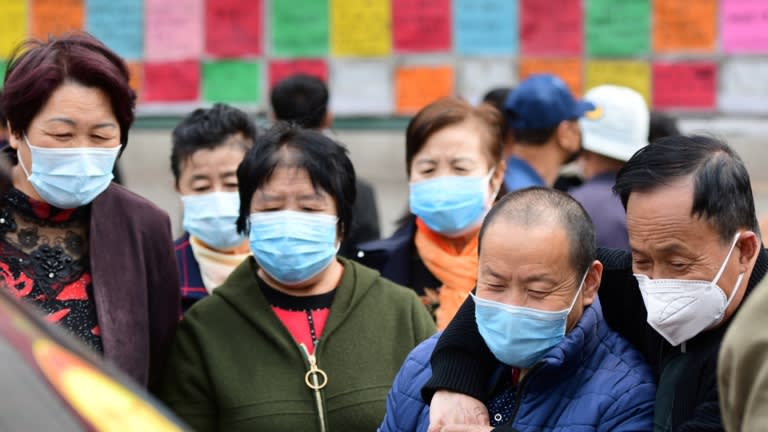 All residents of Qingdao in China’s Shandong Province will be tested for COVID-19.

11:15 a.m. The Chinese city of Qingdao will test its entire population of 9 million over five days, after new cases appeared linked to a hospital, Reuters reports. The city reported six new infections and six asymptomatic cases as of Sunday night. Most were linked to Qingdao Chest Hospital. The central government’s reporting of 21 new cases for Oct. 11 was published after Qingdao’s announcement, but did not include the city’s infections. It is not clear why this was done.

10:30 a.m. The new coronavirus can survive on banknotes, glass and stainless steel for up to 28 days, much longer than the flu virus, Australian researchers say. In a study published in Virology Journal, researchers at Australia’s national science agency said that at a temperature of 20 C, SARS-COV-2 remained infectious on smooth surfaces.

10:24 a.m. South Korea reports 97 cases, up from 58 a day ago, bringing the country total to 24,703 and 433 deaths. The government loosened social distancing rules from today, reopening ballparks capped at 30% of capacity as well as lifting a ban on nightclubs and bars.

9:40 a.m. Singapore and Indonesia agree to reopen borders to each other for business and official travel. Indonesia has recorded over 333,000 cases — the second-highest in Southeast Asia — and its capital Jakarta has been under strict social curbs. Singapore is reporting only a few infections daily. Travelers will be subject to pre- and post-travel tests, both countries said in a joint statement.

8:53 a.m. Japan’s core machinery orders unexpectedly rose in August from the previous month, posting a second straight month of gains, government data shows. Core machinery orders, a highly volatile data series regarded as an indicator of capital spending in the coming six to nine months, grew 0.2% in August after a 6.3% rise in July. 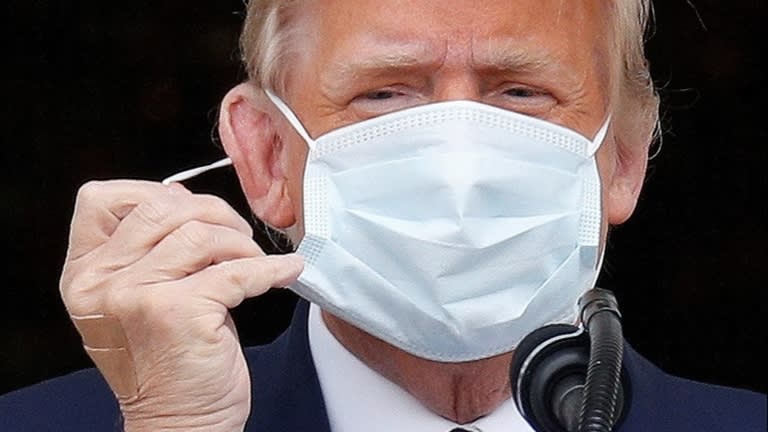 U.S. President Donald Trump takes off his face mask as he emerges onto a White House balcony to speak to supporters in Washington on Oct. 10.

2:09 a.m. U.S. President Donald Trump says he is fully recovered from COVID-19 and will not be a risk to others. “I beat this crazy, horrible China virus,” he told Fox News, adding “it seems like I’m immune.”

7:55 p.m. Japan’s cumulative case total reached 90,099, including about 700 from the Diamond Princess, a cruise ship that was quarantined near Tokyo in February, according to Kyodo. On Sunday, 437 cases were reported while the death toll climbed to 1,643.

7:22 p.m. Malaysia reports 561 cases, the bulk of them in the state of Sabah, which has already seen infections surge over the past few weeks. This brings the country total to 15,657 cases and 157 deaths.

4:20 p.m. South Korea said on Sunday it will begin relaxing social distancing rules today, allowing the reopening of night entertainment businesses and sports facilities, as cases have been decreasing in recent weeks. The new rules mean that nightclubs and karaoke bars can reopen and limited audiences will be allowed at sports events, such as the country’s top baseball league. But stricter rules will be maintained in the heavily populated Seoul region and for high-risk activities, including religious gatherings and door-to-door sales.

3:26 p.m. Jakarta will kick off a two-week “transition” period of eased coronavirus curbs from Monday, Gov. Anies Baswedan said. The capital of Indonesia reimposed tougher social restrictions from mid-September. The new policy allows employees of nonessential businesses to work from offices, but at half capacity. Restaurants must limit eat-in diners to 50% of capacity.

3:06 p.m. India reports topping 7 million cases after seeing 74,383 infections in the last 24 hours, even as the spread eased in western states such as Maharashtra. Deaths rose 918 over the same period to reach 108,334.

10:15 a.m. China reports 21 cases for Oct. 10, up from 15 a day earlier. All new cases were imported infections involving overseas travelers. The number of new asymptomatic cases, which China does not classify as confirmed, fell to 23 from 39 a day earlier, all of which were imported.

7:33 p.m. Malaysia reports 374 cases — slightly up from the previous day — as officials ramp up contact tracing in the state of Sabah, which has seen a surge over the past few weeks. This brings the country total to 15,096 cases and 155 deaths.