Last week’s highlight was the much-hyped Tesla Battery Day, held on Sep 22. While the firm’s CEO Musk announced a series of vertical integration improvements and technological advancements, it seems that the “Battery Day” promises did not live up to the hype of investors, as was evident from the share price performance. The fact that the company’s ambitious battery designs won’t make it to production for another couple of years did not go down quite well with shareholders. Shares of the company fell around 9% during the week.

Nikola Corporation, often touted as the Tesla of trucking, also had a bad week, with shares tumbling more than 40% over the course of the week. Nikola’s CEO, Trevor Milton stepped down in the wake allegations of securities fraud, only strengthening Hindenburg Research’s claims that the EV maker misled investors. Nikola appears to have been a double whammy of disaster with an enormously stretched valuation from overexcited investors & traders, combined with what seems to be a mounting securities fraud situation that has halted its ability to conduct business.

Meanwhile, in a sweeping policy change to combat climate crisis, the governor of California, Gavin Newsom signed an executive order that bans the sale of new internal combustion engine cars effective 2035. With this, California becomes the first American state to enforce such aggressive emission targets, which would further accelerate the auto industry’s roadmap to electric vehicle (EV) transition.

1. Tesla TSLA made some big announcements at its Battery Day event as the company aims to become the world’s largest automaker in the coming years. The red-hot EV maker unveiled plans to manufacture its own tabless batteries, which are expected to boost the range and power of EVs. The firm’s ultimate aim is to achieve “Terawatt-hour” scale battery production with improved battery cell designs and simplified manufacturing processes. In a bid to lower supply chain costs, Tesla plans to build its own cathode plant and a lithium conversion facility in North America. The firm’s CEO Musk revealed that the “Plaid” version of the Model S sedan — boasting jaw-dropping range and performance specifications — is finally available to order, though the deliveries of the same are not expected until late 2021. Musk also promised a $25,000 worth fully autonomous electric car, which is likely to be available in the market in three years. (Key Takeaways From Much-Awaited Tesla Battery Day Event)

2. AutoZone AZO reported earnings of $30.93 per share for the fourth quarter of fiscal 2020 (ended Aug 29, 2020), up from the prior-year figure of $22.59. The bottom line also surpassed the Zacks Consensus Estimate of $24.74 per share. Higher-than-expected comparable sales growth led to the outperformance. Net income rose 31% year over year to $740.5 million. Net sales also increased 14% year over year to $4,545.9 million. The top line also surpassed the Zacks Consensus Estimate of $4,047 million. During the quarter, the company tapped brakes on the share buyback program amid the coronavirus crisis. For fiscal 2020, AutoZone repurchased 826,000 shares for $930.9 million at an average price of $1,127 per share. The company has shares worth $796 million remaining in the current repurchase authorization. (AutoZone’s Q4 Earnings Beat on Solid Comps Growth)

3. CarMax KMX reported second-quarter fiscal 2021 (ended Aug 31, 2020) net earnings per share of $1.79, which surpassed the Zacks Consensus Estimate of $1.03. Encouragingly, the bottom line also compared favorably with the year-ago earnings of $1.40 per share, marking a jump of 27.9%. The auto retailer registered revenues of $5,372.2 million for the August-end quarter, which beat the Zacks Consensus Estimate of $5,209.3 million. Moreover, the top line recorded a 3.3% year-over-year increase. In the wake of coronavirus-induced uncertainty, CarMax suspended the stock buyback program during the fiscal first quarter. As of Aug 31, 2020, it had $1.51 billion remaining under the share-repurchase authorization.(CarMax’s Q2 Earnings & Sales Beat Estimates, Up Y/Y)

4. Nikola’s NKLA founder and executive chairman Trevor Milton has resigned voluntarily from the company. This shocking move came right after the electric-truck maker was accused of fraud by the short-selling firm Hindenburg Research. Milton has agreed to relinquish $166 million in performance-based stock and the right to enter into a two-year consulting agreement with an annual fee of $10 million. However, the company will provide a $100,000 security detail for him and his family for the next three months. Stephen Girsky, former vice-chairman of General Motors and Nikola director, has been appointed as the new chairman, effective immediately. (Nikola in Murky Waters After Milton Steps Down, Shares Drop)

5. Volkswagen AG VWAGY entered into an agreement with Electrify America in order to provide owners of its all-new 2021 VW ID.4 electric SUV with three years of unlimited charging in the United States on the latter’s network.Scheduled for a global debut soon, the 2021 ID.4 electric SUV is based on Volkswagen’s modular MEB platform designed to be sold in the United States. By incorporating the feature of three years of fast charging for leased or purchased ID.4 SUV at no additional cost, the company has removed all hindrances encountered by SUV buyers in going electric. To make it seamless for customers, Electrify America will offer an app through which they can access their charging plans. (Volkswagen to Provide Unlimited Charging for ID.4 Electric SUV)

Meanwhile, Volkswagen’s truck arm Traton SE recently entered into a global partnership with TuSimple for developing self-driving trucks. As part of the deal, Traton also purchased a minority stake in TuSimple, making it one of the four main investors in the company.The alliance is beneficial for both companies as it brings together a global automaker and a level 4 self-driving technology company to build Level 4 robotic big rigs that enable complete driverless operations on predefined routes. (Volkswagen’s Traton, TuSimple Team Up for Autonomous Trucks) 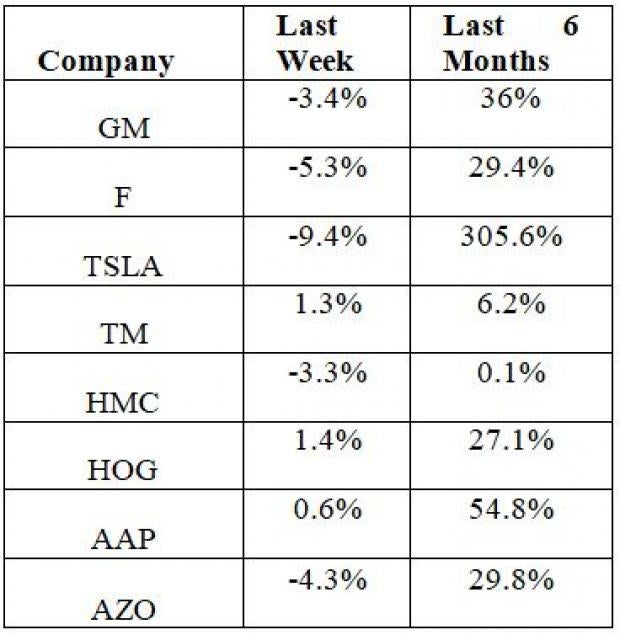 What’s Next in the Auto Space?

Car enthusiasts will be keeping a close watch on September 2020 U.S. car sales, which will be coming out later next week. Investors in the auto sector would be closely tracking the monthly sales reports of auto biggies like Honda Motor HMC, Hyundai and Toyota Motor TM, among many others.