Toyota TM announced the decision to manufacture a heavy duty Class 8 hydrogen fuel cell electric truck for the North American market in collaboration with its subsidiary, Hino Motor Co, a Japan-based commercial vehicle manufacturer. Per the agreement, the Class 8 trucks will integrate Toyota-owned Hino’s recently-introduced XL series tractor with its invincible fuel-cell technology to provide an emission-free big rig. Toyota has not yet detailed the operational plans for the truck but the first prototype is expected to be ready for testing in the first half of the next year. The collaboration of Toyota’s breakthrough fuel cell powertrain with Hino’s heavy-duty truck experience is a winning deal for customers as it offers them commercially viable, extended range, zero-emission vehicles. (Toyota & Hino Team Up to Develop Hydrogen Fuel Cell Trucks)

Daimler AG DDAIF outlined a new plan of action for the company’s flagship Mercedes-Benz brand at an investor event. The new strategy is for Mercedes Benz to restructure operations and slash costs by more than 20% over the next five years to boost profits amid rising investment in electric vehicles.In addition to cutting fixed costs, capital expenditure and research-and-development expenses, Mercedes-Benz will rekindle focus on high-end and luxury products rather than concentrating on higher-volume markets that generate lower profit per vehicle. To continue the race to EV supremacy, Mercedes-Benz has decided to cull its model lineup, inclining the fleet toward electric vehicles.The company desires the electrified portfolio’s share to be 50% of global sales by 2030. (Daimler Maps New Strategy: Trim Costs & Shift Focus on EVs)

Group 1 Automotive GPI released impressive preliminary results. It expects earnings per share in the band of $6.25-$6.65, indicating a surge of 112-125% from the year-ago figure of $3.02. The firm anticipates higher year-over-year gross profit growth on improved margins for both new and used vehicles, which more than offset weak sales volume amid tight inventory levels.Cost-containment efforts seem to have paid off. U.S. SG&A expense as a percentage of gross profit is likely to remain well below historical levels.Group 1 announced a $200 share repurchase authorization and anticipates resuming dividend payouts in mid-November.

Thor Industries THO recently declared a regular quarterly cash dividend of 41 cents per share payable on Nov 6, 2020 to shareholders of record as of Oct 23, 2020. The declared dividend amount marks a 2.5% increase from the last paid dividend of 40 cents. Thor Industries is committed to enhance shareholder value. The company has an excellent track record of paying consistent dividends since 1990 and has a current dividend yield of 1.66%. Notably, the firm has increased dividend for 11 successive years. (Thor Industries Hikes Dividend on Stellar Q4 Results)

Ford F announced the holding of a 7.6% ownership stake in Velodyne Lidar Inc. post Monday’s trading session. This equates to holding 13.06 million shares of the new public entity. Velodyne Lidar is an autonomous-driving company having a forte in developing vehicle sensors used in Advanced Driver Assistance Systems, self-driving cars and trucks. Reportedly, the Ford-backed Lidar expert forecasts revenue growth of 60% per year, with estimated sales of $100 million this year. The company anticipates the top line to rise to $680 million by 2024, half of which will be derived from the existing partnerships. (Ford Owns 13.06M Shares in Recently-Public Velodyne Lidar)

Lithia Motors LAD recently announced the purchase of Latham Ford, one of the largest Ford dealers, catering to the Albany, NY, metropolitan area. The buyout was funded using free cash flow and existing on-balance sheet capacity. The acquisition is expected to contribute $55 million to the company’s annualized revenues. The addition of Latham Ford dealership to the Lithia Family is likely to expand its domestic foothold in the Northeastern United States, which will enhance the company’s services. Of late, Lithia Motors has been on a spree of acquiring high-performing and rewarding dealerships. (Lithia Continues Network Expansion, Acquires Latham Ford) 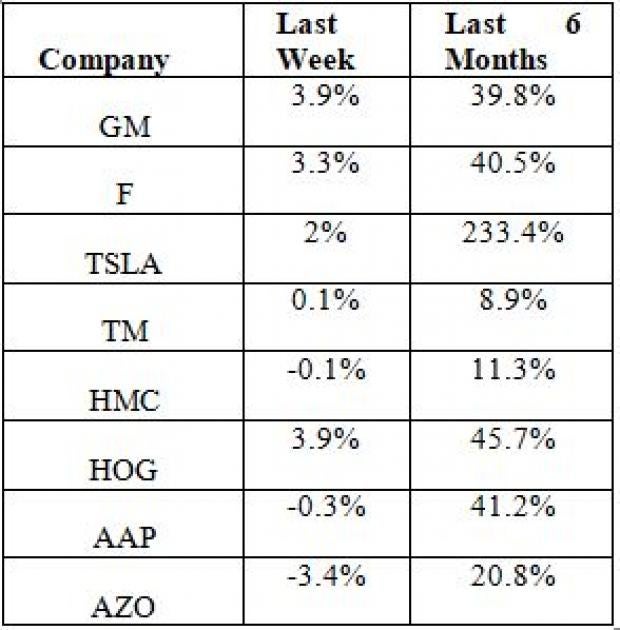 In addition to the companies you learned about above, we invite you to learn more about profiting from the upcoming presidential election. Trillions of dollars will shift into new market sectors after the votes are tallied, and investors could see significant gains. This report reveals specific stocks that could soar: 6 if Trump wins, 6 if Biden wins.