An ever-expanding audience and stellar engagement have made video games the single hottest entertainment business. Research from GlobalData estimates that the industry’s annual revenue will grow from roughly $131 billion in 2018 to $300 billion in 2025, and there’s plenty of room for expansion past the end of that projection period.

The video game market is poised for long-term growth, and investors who build positions in its top companies could be richly rewarded. Read on for a look at three top gaming stocks to buy this month. 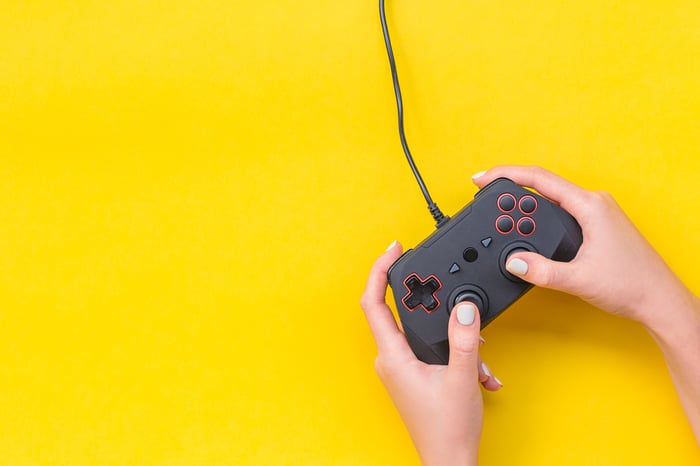 Take-Two Interactive (NASDAQ:TTWO) stands out as one of the gaming industry’s biggest success stories over the last decade. Much of the incredible winning streak has stemmed from the company’s biggest-ever hit, Grand Theft Auto V (GTA V).

Grand Theft Auto V has now shipped more than 135 million copies and is the most profitable entertainment release in history, according to some estimates. First released in 2013 on Sony‘s PlayStation 3 and Microsoft‘s Xbox 360 consoles, a next-generation version of the game was then released on PC, PlayStation 4, and Xbox One.

With new console hardware from Sony and Microsoft on the horizon, Take-Two is poised to release yet another version of GTA V, and it has the potential to continue boosting the company’s sales and earnings for years to come. As an update of a previously released title, the upcoming GTA V update will be significantly less expensive to produce than an entirely new title. It will also boost engagement for the game’s highly profitable online mode.

Grand Theft Auto will likely be the biggest factor in Take-Two’s performance over the next five years, but the publisher is also far from being a one-trick pony. The company’s NBA 2K series is a top franchise in the sports genre, and its old-West actioner Red Dead Redemption has proven to be a bankable property as well.

Take-Two has a strong stable of development studios that should be capable of coming up with new hits, and the company has big growth potential as it builds properties on mobile platforms, takes advantage of momentum for esports, and benefits from digital distribution and in-game spending trends boosting margins.

Glu Mobile (NASDAQ:GLUU) is a small-cap game developer and publisher with a market capitalization of roughly $1.3 billion. It doesn’t have financial or development resources to match the gaming industry’s biggest players, but it’s a very compelling investment opportunity in its own right.

Glu is focused on developing games for mobile platforms that appeal to casual gamers, and female gamers in particular. Women already account for roughly half of the U.S. mobile gaming audience, and the company’s experience in serving this section of the market could work to its advantage as the reach of the global gaming industry continues to expand.

The company’s share price has recently taken a hit after a disappointing second quarter performance, but investors looking for exposure to the gaming space should treat the sell-off as an opportunity. The stock is down roughly 25% over the last three months, but it looks like a worthwhile buy trading at 21 times this year’s expected earnings, and there’s a strong chance it will go on to set new highs.

The company’s core franchises are still putting up solid performances and will give the company some breathing room to work on a new wave of titles that can drive growth. Based on management’s comments, the company will likely be making some acquisitions moves in the not-too-distant future. Glu’s relatively small size could wind up working to the advantage of investors, as just a single new successful franchise would likely translate to big stock gains.

Video games aren’t just a hit as interactive entertainment. They’ve also become hugely popular as a form of spectator content. Huya (NYSE:HUYA) is a China-based company that’s a top player in the gaming-video content space, and it’s been growing its business at a rapid clip.

Sales grew 34.2% year over year last quarter, while net income skyrocketed 86.2%. The company’s forward price to earnings multiple of roughly 33 looks to significantly undervalue the company in the context of strong sales and earnings momentum and plenty of room for continued expansion.

Following a push from Tencent, which owns substantial stakes in both companies, Huya could be on track to merge with DouYu — its chief competitor. The major risk for investors if such a deal were to go through is that Tencent might push to take the newly formed company private, but even this point of potential concern shouldn’t dissuade investors. If a privatization move were to occur, there’s a fair chance that it would be at a price that would represent significant upside for investors who bought at current prices.

If a merger does occur and the company remains public, Huya shareholders would likely see even stronger performance. Joining forces with DouYu could significantly reduce operating expenses and put the combined company in an even better position to expand audience size and monetization.